….this multi-faceted installation seems like a luminous site of worship.
– curator Crystal Mowry

Let’s Glow presents the bombastic world of the Crystal Kings, beings of pure imagination and intention that have simply willed themselves into being the way crystal grows out of rock.

This colourful allegory of willpower and creativity is presented as paintings, textile art, mural installation, and animations.

Read the curator’s text after the images. 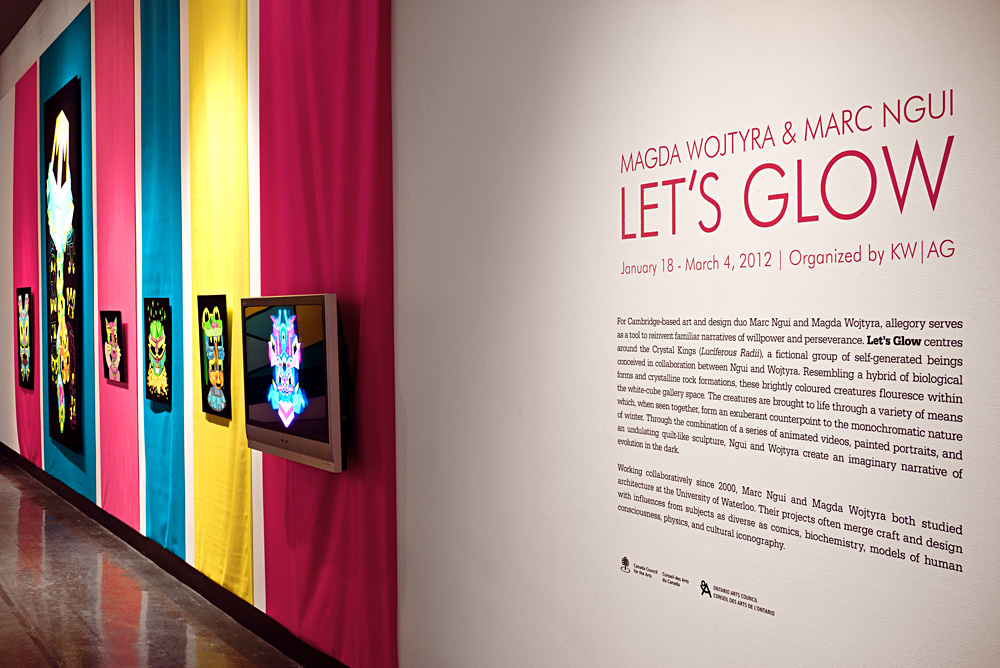 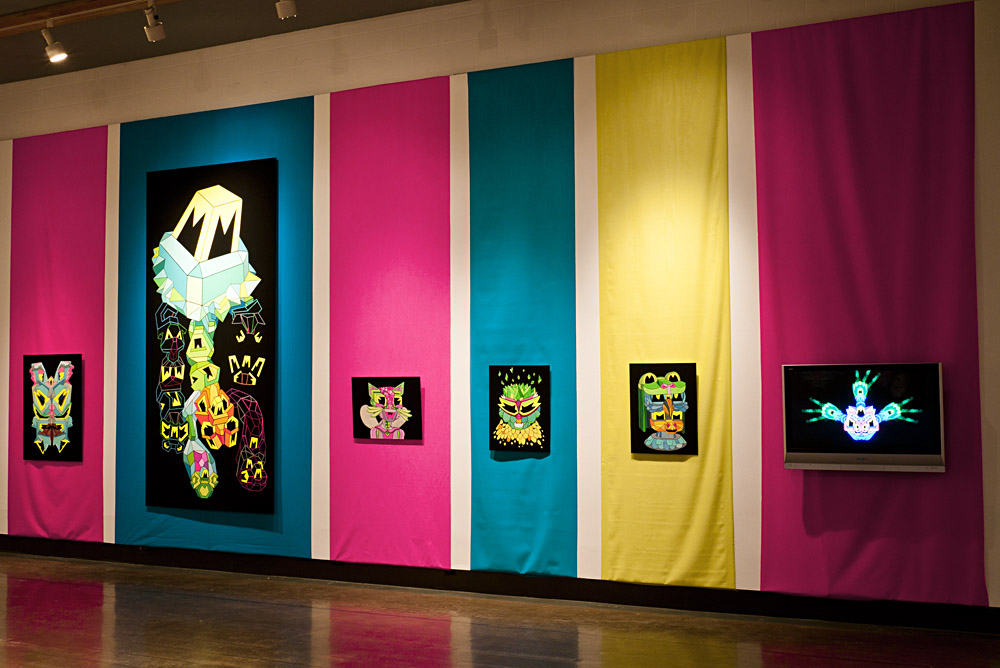 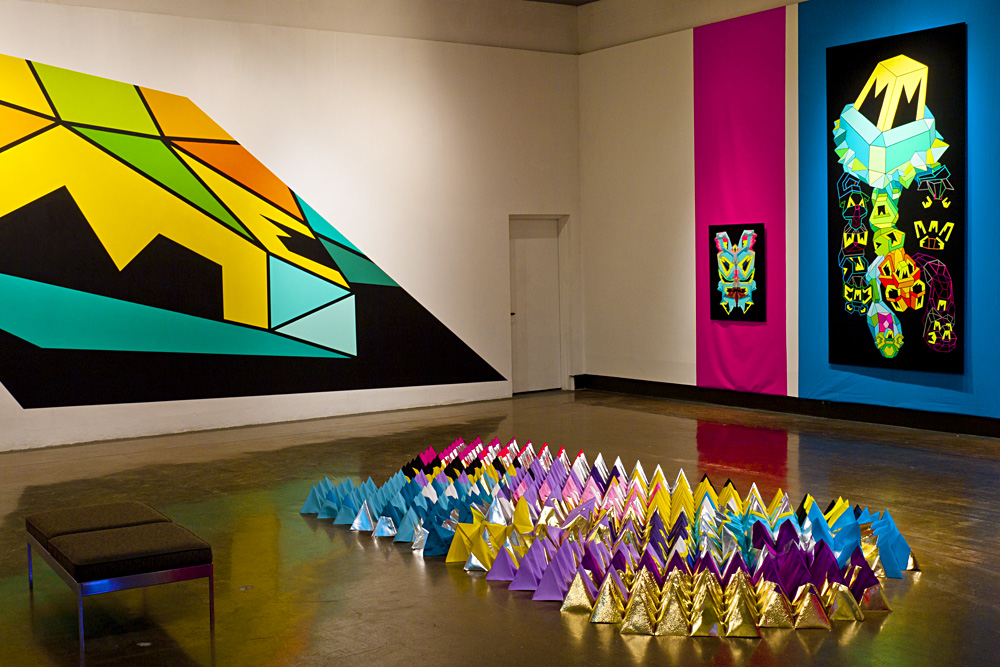 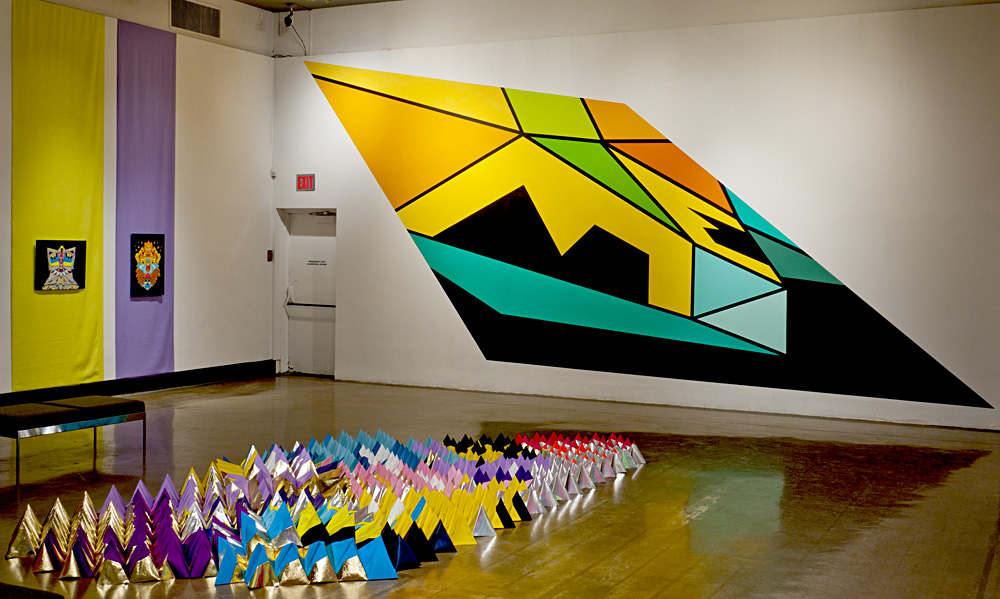 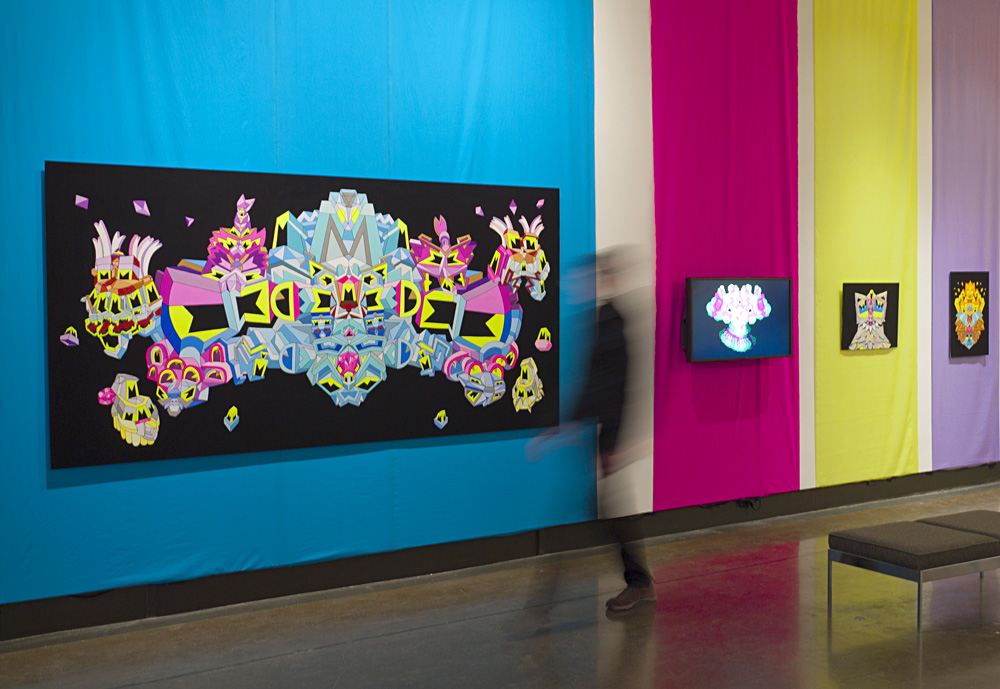 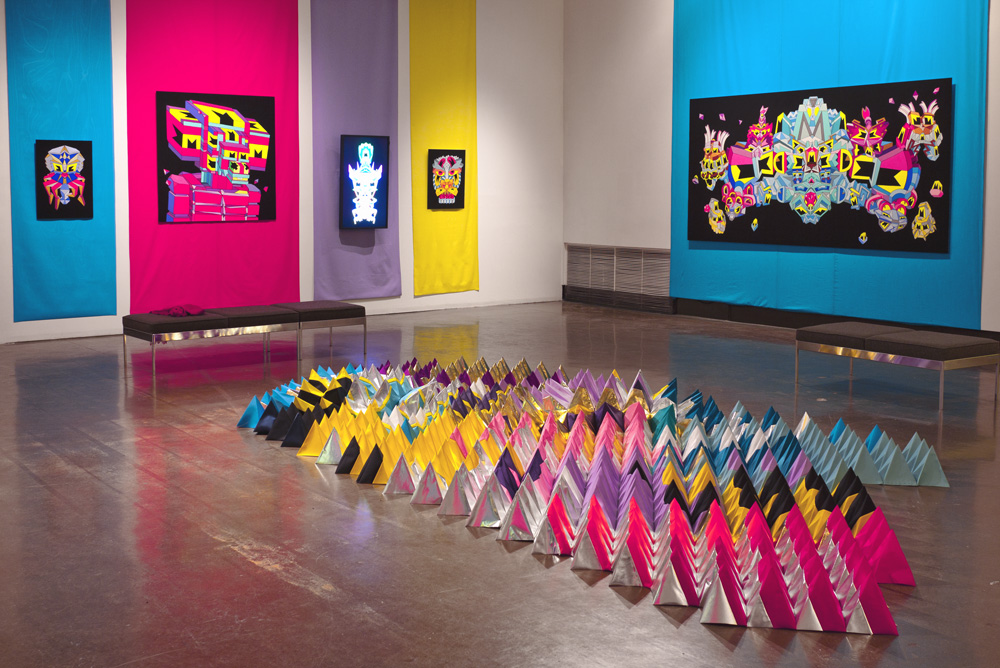 All the paintings were done in acrylic gouache on paper and mounted to dibond. They were displayed against textile banners of various colors.

Check out 3 animations from the exhibition on the Crystal King Animations page.

What might the evolution of storytelling look like without the presence of allegory? Allegory is an indirect strategy, one that relies on symbolic representation, rather than specific language to convey ideas. In the influential essay “The Allegorical Impulse: Toward a Theory of Postmodernism”, art critic and activist Craig Owens proposed that allegory be elevated from the realm of trite storytelling and be recognized for “what is most proper to it: its capacity to rescue from historical oblivion that which threatens to disappear.”(1) For Cambridge-based art and design duo Marc Ngui and Magda Wojtyra, allegory becomes a tool to reinvent familiar narratives of willpower and perseverance.

For their exhibition at KW|AG Ngui and Wojtyra have created Let’s Glow, a new installation which is anchored by an imaginary group of self-generated beings. Aptly named the Crystal Kings (Luciferous Radii), these beings seem to resemble a hybrid of biological forms and crystalline rock structures. The nature of their scientific name, and the fact that they have one at all, is a nod to the artists’ interest in biochemistry and other branches of scientific inquiry. The origin story of the Crystal Kings is open ended, evolving as the artists continue to work through its chapters in various visual manifestations. Ngui and Wojtyra propose that these beings are a species which grow themselves into existence, aided only by a desire to be. Their origin story, like many allegories, embraces a symbolic language or narrative shorthand to point to larger analogous ideas.(2) One might consider Edwin A. Abbott’s Flatland, a geometry-inspired novella which satirized the division of the classes in Victorian England or Plato’s description of education through illusion in his Allegory of the Cave are just two examples of likely companions for Ngui and Wojtyra’s allegorical pursuits. Guided by autodidacticism and utopic aspirations, the artists’ journey seems to parallel that of the Crystal Kings. The notion of self-generation and desire for continuous evolution connects the real lives of the artists with their imaginary equivalents.

In Let’s Glow, the Crystal Kings are visually manifest through a variety of means which, when seen together, form an exuberant heraldry in various stages of evolution. The sole sculptural component, Polytopia, consists of an undulating mass of identically-scaled pyramids crafted from dead-stock fabric of various hues and metallics. Polytopia might be read as both a landscape (as seen from a distance) and body (made strange through magnification). If one could conceive of witnessing the evolution of the Crystal Kings on a cellular scale, the dimensional quilt-like Polytopia is likely what they would encounter. On the wall directly behind Polytopia is Crystal King Kwag, a massive mural painted directly on the gallery wall. Torqued and stretched to fill the visitor’s field of vision, the mural depicts a Crystal King with a static energy unlike any of the other images throughout the space. The geometric abstraction of the Crystal King activates the entirety of the space, like a secular Technicolor fresco charging the white-cube gallery walls, one wonders if its evolutionary process has just begun and time has conveniently slowed down to reveal a unique form of mitosis.

It would not be a stretch to suggest that this multi-faceted installation seems like a luminous site of worship. Lining the walls of the room are bright, multi-hued banners which ascend the height of the space. Floating in front of the banners is a series of portraits of the Crystal Kings in what might be described as later stages of evolution. Smaller painted portraits depict the head of each King against a velvety expanse of black, whereas two larger works fill our field of vision with a static representation of the Kings mid-evolution. Each portrait, with its hard-edge graphic style honed in earlier comics and animations by Wojtyra and Ngui, possesses a totemic quality which is reminiscent of masks that have been central to methods of storytelling and
the transfer of folkloric history in cultures around the world.

Punctuating the painted portraits are three short, yet dynamic, animations of the Crystal Kings evolving. In these digital videos we see the differentiation of the various “cells” that make up these creatures unfold in a Busby Berkeleyesque pageant. Each video details an evolutionary cycle which starts with what we believe to be an eye. The eye, as an image and symbol is a constant throughout the installation, rendered consistently as a stylized cartoon “M” in yellow and black. Attempting to highlight the role of consciousness in willpower, Ngui and Wojtyra have staged an evolutionary process which springs from a central perceptual mechanism.

The Kitchener-Waterloo Art Gallery gratefully acknowledges the financial support of our sponsors and our many individual and corporate donors.

The artists would like to thank Sara Kamalvand and Karri Campbell for their generous assistance in assembly and installation and the Ontario Arts Council for financial assistance.