Written by Gilles Deleuze and Felix Guattari originally in French, Marc is reading the English version of the book and translating it into a visual format.

These high quality posters are printed by Printful on thick, matte, archival paper and come in 2 sizes, 12 x 16 inches and 16 x 20 inches.

Shipping to anywhere in the world is included in the price.

From Paragraph 7, 1914: One or Several Wolves
A Thousand Plateaus, by Gilles Deleuze and Felix Guattari:

"What we are trying to say is that there is indeed one exterior milieu for the entire stratum, permeating the entire stratum: the cerebral-nervous milieu. It comes from the organic substratum, but of course that substratum does not merely play the role of a substratum or passive support. It is no less complex in organization. Rather, it constitutes the prehuman soup immersing us. Our hands and faces are immersed in it. The brain is a population, a set of tribes tending toward two poles. In Leroi-Gourhan's analyses of the constitution of these two poles in the soup—one of which depends on the actions of the face, the other on the hand—their correlation or relativity does not preclude a real distinction between them; quite the contrary, it entails one, as the reciprocal presupposition of two articulations, the manual articulation of content and the facial articulation of expression." 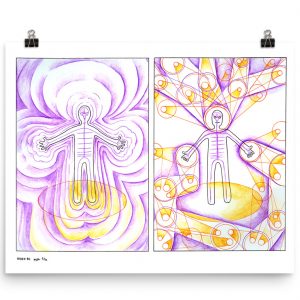